If you want to share your wired internet connection to other over WiFi through your laptop, then this tutorial can help you to create a wifi hotspot in Windows 10 based laptop without any third party software.

What is WiFi Hotspot?

WiFi Hotspot is actually a wireless access point which makes it possible to share the internet with other devices. Normally a WiFi router do the same thing but if you do not have a wifi then you can use the wireless network adapter of your smartphone or laptop to serve as a network access point.

Laptops come with built-in WiFi hardware and you can easily make hotspot and share WiFi but if you are using a PC then you need to purchase and install a separate WiFi dongle for it.

Don’t be disappointed because we are here to solve this problem. You can create WiFi hotspot without using third party apps with the help of Command Prompt .  All you need for this, is an installed WiFi card or a WiFi dongle.

How to create Wifi Hotspot in Windows 10

Creating a wireless hotspot in windows 10 is an easy task which can be done with the help of some commands. The overall configuration takes a few minutes to connect the wireless Hotspot Network.

Before proceeding further please also check whether your network adapter is hotsport ready or not?

1. First of all, you have to set SSID and Key which are the name of your network and password of the network i.e WiFi Hotspot. Password must be atleast 8 characters long.

Other devices can now connect to the hosted network using the password given in step 1. But still they can not use the Internet over this network. To enable the internet sharing use “Internet Connection Sharing” option.

Stop sharing Internet Connection with Other Devices in Windows 10

Windows 10 also allows its users to stop the connectivity of the WiFi with the other devices. Just type the below command to stop the network.

Just by using a single line of command you can enable and disable WiFi Hosted Network.

Windows 10 is very user-friendly and you can change settings as per your requirements. If you want to make amendments in your current settings of WiFi network like SSID or Password, then you can make them with the help of these commands.

To view the settings, add these prompt commands in your computer.

WiFi Hotspot option in Widows 10 is a great option which has solved a big connectivity problem. Though the performance of the network isn’t similar to the performance of the physical network connection but you can’t deny from the usefulness of it in sticky situations and definitely, all credit goes to Windows 10 and its exciting features.

Before setting up and starting the WiFi Hotspot, you need to check whether your wireless adapter supports hotspot or not. To check the physical presence of adapter on your computer you need to run the following command. 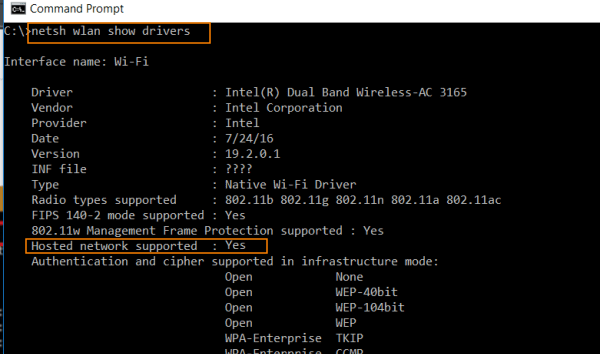 Yes will appear next to the Hosted network supported. If your laptop or PC support WiFi then you can follow the further instructions. Otherwise, you need a USB wireless adapter for this purpose.

Also Read: How to recover forgotten WiFi password in Windows 10