Smart Security for Internet of Things With F-Secure SENSE

In the last decade, there has been an unprecedented development in technology, mostly in areas of networking. In this development, more and more devices have been able to get connected to the internet. The connection has tremendously enhanced users experience while making it easier to access the needed information from the internet. This internet working of physical devices also referred to as the Internet of Things (IOT), is the sole reason for the development of “smart devices” that can interact and share information with one another. With time, this technology keeps getting bigger and better, with more devices being connected each day. The devices range from vehicles, phones, smart fridges, cooking ovens to entertainment gadgets such as television. However, the technology has had its shares of concerns which mainly has to do with security. 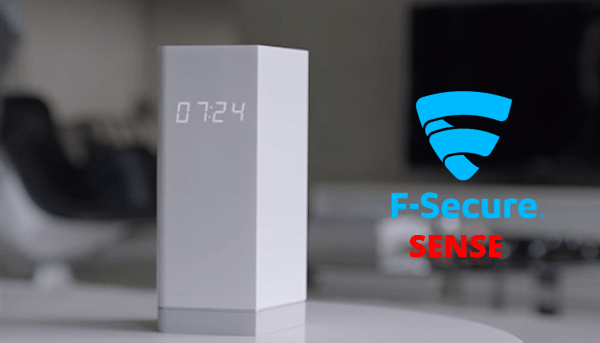 Security is the main challenge facing most internet based systems. Having an effective and proper way of ensuring intruders don’t have access to one’s system and wreaking havoc is a welcomed idea for many. In IOT, securing the information and Interconnected devices creates more faith to its users while encouraging more people to embrace it. This is the reason why a finish company, F-Secure came up with a new approach to security at Home in terms of a new gadget by the name F-Secure SENSE.

What is F-Secure SENSE?

F-Secure SENSE is a smart security device for connected homes that enhances security via the addition of a layer that secures the network while creating a platform for monitoring it using an application installed on one’s mobile phone. At the moment, the device comes with a 1 GB of flash storage, 512 MB of RAM, and a dual-core processor (1GHZ). Physically, the device can be described as a tall, parallelogram shaped device, with small display upfront that shows time and the temperature.

With the addition of a security layer, a routine scan will be carried out on the network and in the event of any suspicious activities, the user is alerted. By use of the app installed on either a mobile phone or a personal computer, you have the power on what to do, whereby the suspicious traffic can be blocked. In other words, F-Secure SENSE will create some form of enhanced firewall around your home network. Another outstanding feature of this device is its ability to monitor the activities of connected devices within your home. In so doing, you will be assured of being protected from security issues that might arise internally.

Like most antiviruses or firewall software in the market, F-Secure SENSE is able to protect the network by having a database of known viruses and other threats maintained in its cloud. With this huge repository, the security devices will be able to ascertain malicious activities and take appropriate measures that will prevent further harm from being caused. In addition to this, incorporation of artificial intelligence to the device’s system allows it to have the ability to learn about new threats (Machine Learning) by analyzing the patterns of their behavior and using the newly acquired information to prevent future attacks.

F-Secure SENSE, guarantees safer times, as the world embraces the notion of “smarter devices” taking over. Its incorporations into home’s networks, will not only guarantee privacy from unauthorized persons but also the risk of losing relevant information. Therefore, you will no longer be worrying about phishing scams or any form of eavesdropping since they will be blocked automatically. In a nutshell, the device has the following features; ability to surf anonymously using a VPN, Parental Controls, ability to protect from viruses, bots and tracking, guest Wi-Fi protection and IOT security.

Since this gadget is still in its inception stages, having been released to the market in 2016, more features are expected to be developed over the course of time. These features will make the SENSE network highly secured and private since it will be protected from existing threats and new threats.

The device can be bought from F-Secure website and at the time of writing this, it costs $199.00 which includes a free one-year subscription worth $118.00 that have all security features. Additionally, there is an advantage of free shipment with a 30-day money back guarantee. Nonetheless, the device will be available for shipment in selected European countries and the US.