How to Roll Back a Driver in Windows Quickly

In this tutorial, we'll show you how to reinstall the previously installed driver of your device quickly.

In this article, we are going to learn how to roll back a driver on Windows operating system. Now if you’ve got an issue with the driver that you’ve got running on that system you can roll back to an older version. Now sometimes when Windows doesn’t update or it updates your drivers if you let Windows control it, it can sometimes cause an issue, so if you do have an issue with some missing driver that windows are updated and you had a stable one previously and you want to roll back to it. I’ll show you how you can do that in this article. 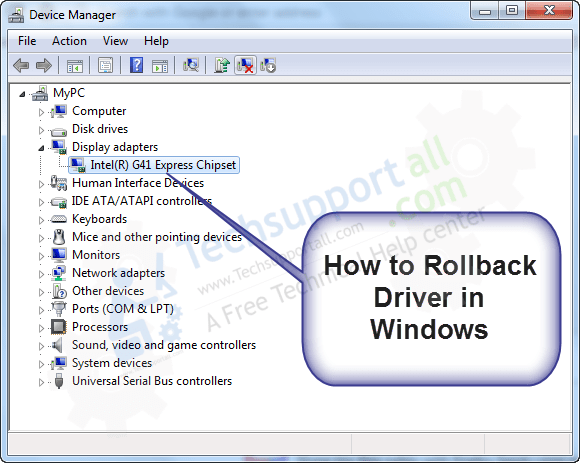 Now we know that there’s only a Windows standard default driver on this system so when I roll back we’ll have to update again but I’m just going to give you an idea of how you roll back drivers and this could be a network driver or Audio Driver or whatever it is that you’re rolling back, so I’ve rolled that driver back and you can now see that we’ve got Microsoft basic display driver which is no good for gaming or anything like that it’s just used for this tutorial, so I could just show you how to roll back.

So if you look here now we’ve got this Microsoft basic display adapter which is no good for me so what I’m going to do is just the update again because I’ve got no issues with the NVIDIA driver that was on the system I just wanted to show how you can roll back a driver.

Follow the below procedure if you want to go with the latest drivers.

So let’s update the driver and do a search online it should go out there and get the very latest driver and then install that onto my system now if you’ve got a bunch of drivers that you’ve been downloading and you haven’t formatted the system you can roll back to a driver that was more stable tired. Now normally I disable all the driver updates for Microsoft that I like to choose to install my drivers at the manufacturers website and get their drivers packs there and install those because I find I have more insignificant problems with those rather than then Microsoft decide what to update on my system but that’s just me it’s entirely up to you how you go ahead and do your PC but that’s how I set mine up.

So it’s just going ahead and install in the display driver here just give it a few more seconds and let that update and you’ll be able to see basically it’s gone back to a standard and video driver now again this can resolve many problems especially if windows forces an update of a driver on to you and you had a really stable Audio Driver working at that particular time and it then rolls out a driver that’s buggy and you’ve now got an issue with your audio you can always roll back.

Was this article helpful?

Let us know if you liked the post. That’s the only way we can improve.

59% off on Norton Security

Activate Windows 10 with a Windows 7 product key, Here’s How (Tested)

Microphone Is Not Working In Windows 10, How to Fix it?

Input Error: There is no script engine for file extension “.reg”

I have deleted hiberfil.sys as administrator but it has not freed up any space on my C:?

how do i clean my desktop computer

This website uses cookies to improve your experience. We'll assume you're ok with this, but you can opt-out if you wish. Accept Read More