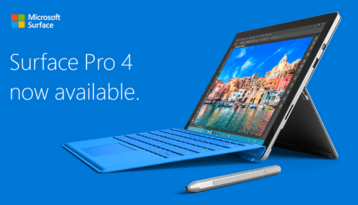 What is the Microsoft Surface Pro 4?

we can conclude that the Microsoft Surface series still has much room for improvement in this area.- It lacks multiple USB ports, having only a USB 3.0 and a mini DisplayPort socket.

The two major new features of this laptop are the new Surface Pen and the New Type Cover (available for an additional $130). While aesthetically, the Microsoft Surface Pro 4 looks very similar to the Surface Pro 3 version, these two new features have been praised among critics and buyers alike. The new surface pen has 1,024 levels of sensitivity which is almost four times as much as the pen from the previous version. On top of that, it comes with an eraser that doesn’t only attach to the device’s surface via magnetic fields but also performs very well. Some users have stated that the surface pen comes as close in terms of functionality as a regular pencil.
While the new type cover comes at an additional cost – and a high one for that matter, it still provides the user with a faster and smoother typing experience. The keys aren’t flat anymore rather they protrude a bit from the actual cover providing greater feedback than in the Surface Pro 3 device. The new trackpad is also more accurate and it’s 40% larger than the one found in the previous version.