Most modern laptops and smartphones come with their own built-in WiFi cards. To my dismay, that is not the case with the vast majority of desktop computers. In this case, a WiFi card is attached to the PCI slot or to the USB port.

But if you’re like me, you’re not sure which card to pick. because there are many types of PCI WiFi cards available online. So I will help you pick the best PCI WiFI adapter for your PC.

If you wish to access the internet wirelessly on your own computer, you’ll need either an external USB WiFi adapter or an internal WiFi card.

I’ve compiled a list of the top 5 WiFi adapters for PCs to help you make a decision. I’ve got you covered whether you want to play games, watch 4K films, or just access the internet wirelessly.

Keep in mind that there is no particular sequence to the WiFi cards discussed here. Depending on your requirements and budget, pick a WiFi card that best suits you.

Factors to consider before buying a WiFi Card

Though most PCI cards come with dual band support, But recently, with the release of the WiFi 6E, a new band has been introduced with a 6 GHz frequency. If this band is supported in your country, you should consider purchasing triple-band WiFi cards.

If you buy the older WiFi version wifi card, it will still work, but at a reduced speed. So keep this in mind: always choose the most recent WiFi version adapter that is compatible with your router.

Some more points to consider a WiFi Card

Reviews of the best WiFi Cards

The GIGABYTE GC-WBAX210 is the first PCIe adapter on this list of top WiFi cards for computers. The newest Intel AX210 chipset is built in, and it’s compatible with the newest WiFi standard, 6E.

It’s a PCI-e card that supports three different wireless frequencies at once, with rates of up to 2400 Mbps on the 5GHz and 6GHz bands and 574 Mbps on the 2.4 GHz band.

In addition, this PCI-e card comes with a high-performance external antenna from AORUS, which can be adjusted to the best possible position for signal reception thanks to its magnetic base and numerous angle-tilt settings.

Because of its compatibility for MU-MIMO, the GIGABYTE GC-WBAX210 may facilitate simultaneous communication between a number of gadgets. There’s built-in support for Bluetooth 5.2, so you can hook up your wireless gamepad, headset, and other Bluetooth devices without buying a separate adapter.

The GIGABYTE GC-WBAX210 card is the ideal option if you want a PCI-e card that is compatible with the newest WiFi standard. 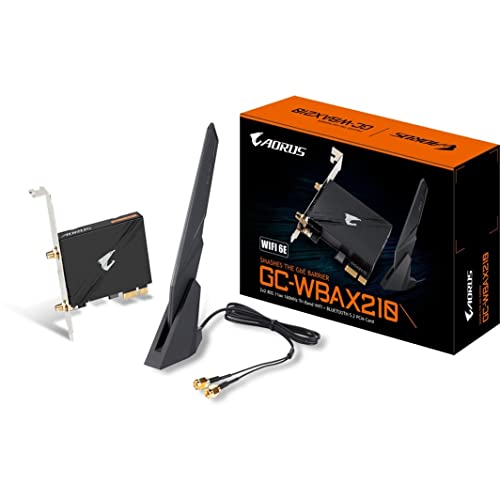 The TP-Link Archer TX3000E comes equipped with a WiFi chipset made by Intel, which is compatible with WiFi 6 networks. It’s a PC wireless network adapter that supports both the 2.4 GHz and 5 GHz bands, with speeds of up to 2400 Mbps on the latter and 574 Mbps on the former.

OFDMA and MU-MIMO technologies are included into Archer TX3000E to offer the best possible WiFi connection by cutting down on delays and letting more devices to talk to one another at once. Because of this, the WiFi adapter is an excellent choice for a gaming PC.

There are two omnidirectional antennas on the Archer TX3000E. A magnetic base is included with the shipment of these high-performance antennas. This makes it simple to position them where they’ll receive the strongest signal.

The addition of built-in compatibility for Bluetooth 5.0 is frosting on the cake. This means that you no longer need to install any additional Bluetooth adapters on your PC in order to use your favorite peripherals.

You may feel safe when using your WiFi with the TP-Link Archer TX3000E because it is compatible with the most recent WPA3 security protocol.

A WiFi 6 router is required for this WiFi card to reach its full capabilities on a personal computer. Archer TX3000E supports the latest 802.11ac standard as well as 802.11a/b/g/n networks, so there’s no need to worry if you don’t have a newer router just yet.

This WiFi adapter is ideal if you play online games or stream videos in high definition without experiencing any latency. 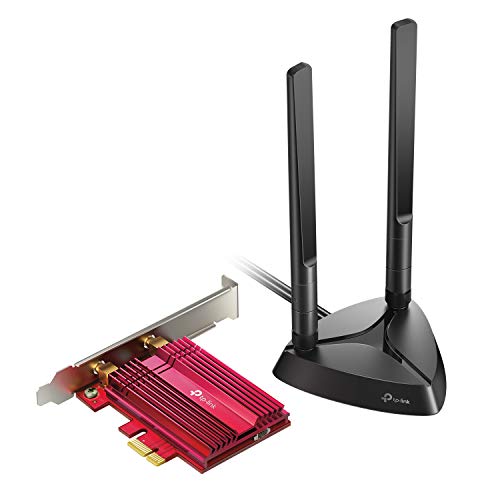 The Archer T5E comes with two antennas that may be moved around outside the device. With the improved range and stability provided by these high-gain antennas, you can play games and watch videos in 4K resolution without any hiccups.

Bluetooth 4.2 and WPA/WPA2 network security are built right in.

There is no Wifi 6 support, the most recent Bluetooth, or WPA3 security on this WiFi card. On the other hand, if your PC isn’t up to date, Archer T5E is a fantastic addition. 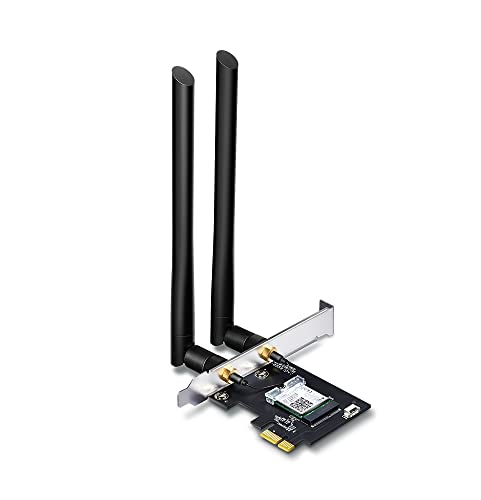